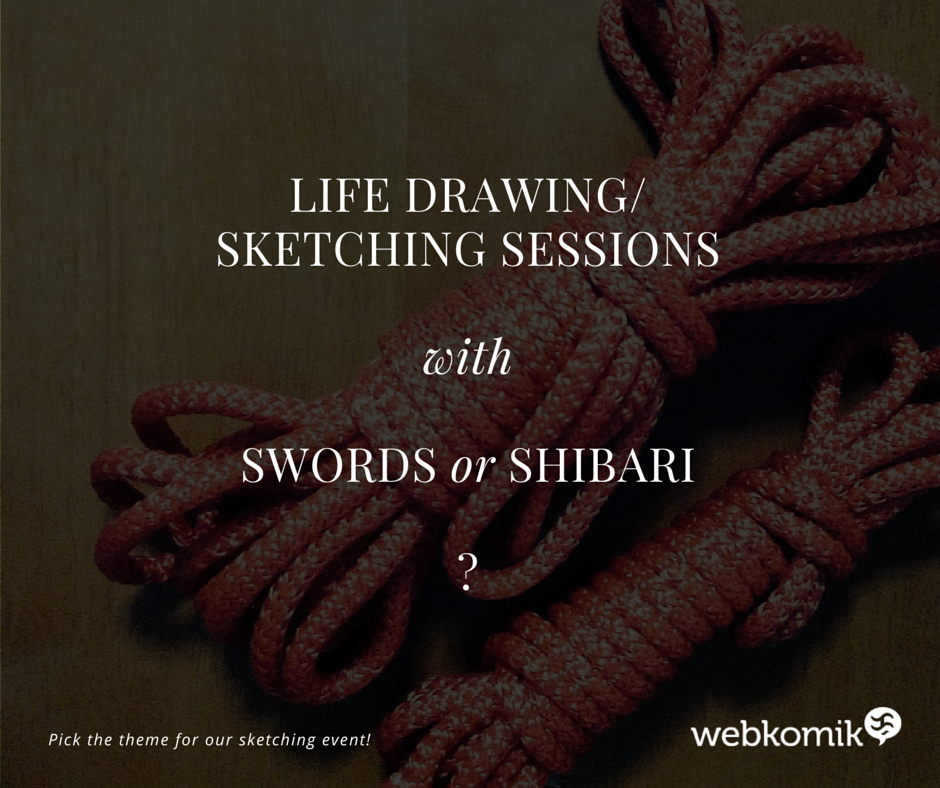 For the past month or so,  I’ve been wanting to host a life drawing/sketching event for Webkomik.net and I finally got most of the research done. Unless there’s a major change (like if everyone’s unavailable), here are the tentative details for our first sketching event:

This isn’t some crazy ass formal event—you can relax. We’re just friends coming together to practice drawing and have fun.

The venue is a cozy, private, and air-conditioned function room in Makati (near Little Tokyo and Makati Cinema Square) with enough space for up to 35 people.

We’re limiting this event to a maximum of 20 participants for now to keep things manageable.

We need a minimum of 10 confirmed participants for this event to push through.

We’re looking at hosting the 3-hour session on a Saturday morning, from 9am to 12nn, but feel free to show up earlier as we’ll be around as early as 8 to set up. (We might hang out for lunch afterwards.)

Depending on the difficulty of the poses, we might have as long as 5 to 15-minute poses, with breaks in between.

If you don’t know any of the other sketchers, make sure to let me (Dee) know.  Ohana means family, my friend. We want everyone to have fun.

You’re encouraged to bring your own art materials (i.e. sketchbooks, laptop+tablet, etc.) and mats if you’re not comfortable sitting right on the floor.

There’ll be chairs, tables, and unlimited tea/coffee if you fancy them. You can buy pasta with chips, sandwiches, and other food at the venue but there’re plenty of nice restaurants nearby (from Japanese cuisine to McDonald’s).

You’re free to eat or drink inside the function room but alcoholic beverages aren’t allowed during Webkomik.net Events.

For the meantime, only authorized photographers are allowed to take photos during the event.

If the above sound good to you, the next item on our agenda is to decide on a theme!

We have the option of choosing one now and saving the other for later, or including both during one session. It’s up to you.

Just in case you’re unfamiliar with them:

The video clip you can find through the red link here offers a nice glimpse into Japanese bondage but contains nudity: NSFW Link Here.

Our models and volunteers will all remain clothed during this session.

If we choose Shibari, we’ll mostly be sticking to ornamental ties. Suspensions (where the model will be hanging from the ceiling via complex and intricate ropework) are a little outside my skill level at the moment. We’ll stick to mainly aesthetically focused bondage for now so the models are able to sit, stand, or recline comfortably while maintaining their poses.

Filipino Sword Fighting is really just another fancy name for the arnis, escrima, or kali that we’ve grown to know and love. The stickfighting you studied in PE actually originated from blade-based techniques which adapted to the constraints of the times (namely, the Spanish colonization, etc.) but lives on in the myriad styles, systems, and clans under our one Filipino Martial Arts family.

Should we choose Swords, I’ll bring the wooden practice swords, wooden canes, and practice knives I use during training so we can take requests for poses. These could prove useful for those of you with comics which involve sword-, blade-, or knife-based fight scenes, so feel free to suggest poses that you want to practice drawing.

So… Swords or Shibari?

Now, if the above topics sound good to you and you’ve picked which one you want, you can share your thoughts on our Facebook Group poll here so we can tally the votes.

We found our models! Thanks, guys!

That’s all of it so far! Have you decided which theme you want? Do you have a friend that might be interested? (Invite them!)

Let us know which theme you want us to use on Facebook so we know you’re interested!

The Webkomik Network is a resource for Filipino webcomic creators.